And because the term is open to interpretation, I shall bore you with an explanation.

I was born with a vagina and still have it and am very fond of it. That’s not a dig at trans people. We live in a foolish society with rigid rules and so I could be medically diagnosed (!) as gender non-conforming and politically as a transgressor … and it’s all rubbish really and simply shouldn’t matter one bit. But we (we humans) are by and large, slaves to things like media and religion and others’ opinions. Tsk.

So here we have this rather lovely old term, “butch,” which people tend to apply to masculine looking women, especially if they’re lesbians – and I am both of those things. As I have said ad nauseam, I only adopted the term myself in my thirties, because of all those negative connotations – butch dykes tend to be seen as portly and badly dressed (and I am neither). I was described as androgynous and then later, soft butch. Over the years I had a think about the portly, badly dressed, mannish dykes who are out there, spearheading visibility, but getting reviled by their own community. It’s bullshit, isn’t it? I started to identify very publicly as butch. I will admit to being far more solid around the middle than I was in my younger days, but I’m still not badly dressed.

I’m instantly read as a dyke, sometimes read as male and I honestly don’t give much of a shit about how people see me – although I am certainly vain enough to enjoy the fact that anybody bothered to look. I get comments sometimes – sometimes they’re directly abusive and sometimes merely fuckwitted.

“So you’re the man in the relationship.”

No. I’m the woman wearing men’s clothing, mostly. My voice happens to be deep, I loathe make-up and can rarely be arsed shaving my legs. My sex is female and has no bearing on my choice of clothes etc. My gender can be a simple or complex as you care to make it. Butch, as they say (them with the beeeg words) is my gender performance. A few minor adjustments to society, however, and I and everyone else would give even less of a shit.

FFS … if butch equalled male and femme equalled female, I guess most of my body parts would be femme and constantly starting uprisings about the way the rest of me is. So ja, I’m butch – by appearance and stubborn politics.

“You dress that way because you want to be a man.”

No. You wouldn’t believe the fun I have as a woman … the orgasms, the orgasms!

“Why can’t you be more feminine?”

Because I don’t wanna.

*no femmes were harmed in the making of this blog post. 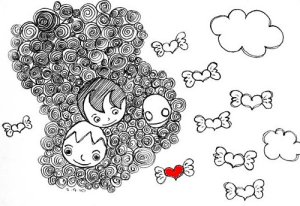 I have many questions about why society at large and specifically its het population do not tolerate us, but the queer community? What’s not to understand?

I hear questions like, why must there be dyke drama – and it’s such a simple thing. There isn’t such a specific thing at all, it’s merely part of being human and being a small community.

Anyone need anything else demystified?

Day 17 – Your first experience with an LGBT organization or event (Day of Silence, Pride, etc)

It was London Pride, in Brixton, in 91 or 92. I left the car at a railway station in Surrey and took the train and tube to Brixton. On the tube, a very portly and bad tempered looking dykey looking woman sat opposite me, cradling a pack of beer.

Once again, I wondered how the hell to get into that rainbow world. I was with my brief and sweet first girlfriend then, but she was working that day.

There was a field and a stage and that fat woman from Cell Block H (oh how I date myself) and maybe one of the guys from Erasure and a bunch of soul-ish nineties brit music types. I was going to buy a beer, but never managed it. I either ate or smoked some hash and after that I wasn’t navigating too well. Some fags shot and me with water pistols and I was delighted.

I bought my first ever queer shirt – dyke with attitude.

I didn’t really understand the need to be political then, I was too busy trying not to be unhappy. I didn’t stay late. It was a sunny day, for England.

Barely memorable, all those Prides ago.

I read the title some days ago and was all set to post some very, very cheesy fanpics of very cheesy “stars.” Olivia Newton John, Carrie Fisher as Princess Leia, Nancy McKeon (Facts of Life), Erin Gray (The Love Boat, Silver Spoons) – they were the kind and beautiful women of my childhood dreams. Then I noticed it says LGBT crush, so then I though ok maybe the object needs to be LGBT too. In which case I’d say Sara Gilbert (Darlene in Rosanne) – maybe. I dunno… Now I’m too conflicted to go find a pic … Hrmf. Was gonna show you my cheeeezylicious autographed photo of Erin in her lurve boat sailor suit wot I got on Chesterfield market for two quid. Don’t think any photos of my first lesbo relationship survive – it wasn’t long and she wouldn’t add me on Facebook back when I was on Facebook. Lol.

Some women can’t say the word lesbian… even when their mouth is full of one.
Kate Clinton