[waiting for an appointment to arrive + this ensued]

victims don’t have to be inherently weak – they just need to be outnumbered. anybody and any group can potentially be victimised.

you start by noticing a difference between “them” and you, that you don’t like – because it makes you feel inferior perhaps, or superior. or a strange mix of both. and you begin by name calling – something catchy, something that’ll stick. and you gather like-minded people around you to join in …

applying logic rigorously here, you can see the connection between the birth of a prejudice and a possible result of massive genocide. so name-calling and gossip and forming little cliques are effective methods towards gaining some power. and power is a beautiful, ugly, wondrous, terrible and dangerous thing.

plenty of minorities wound up defined that way (and subsequently murdered) not because they were small and weak, but because they were doing rather well, stood out and the people around them got jealous and pissed off and it united them.

i am guilty, for instance, of being habitually snotty and dismissive of americans and of straight people. the former, because i live in africa and see things from that particular perspective and the latter because i am queer. it’s actually completely, unforgivably wrong though. crass generalisations pretty much always are. now, it’s easy for me to get away with it, because americans and hets are far too powerful to ever give a toss what i think. but what if i started picking on smaller enclaves in undefended positions?

apply logic rigorously. and then “do as you would be done by.”

it’s war – pick a side (people are dying here)

All it takes for evil to triumph is for good men to do nothing. (Edmund Burke)

One thing I get very worked up about, to the point of a fairly insane attack of irritation, is fence-sitters. It’s unjust of me – the world needs people who can see both sides of the proverbial fence after all (but I hope the barbed wire scars their asses). Ahem. If you haven’t realised it by now, let me state openly that I am, in fact, not a very pleasant person.

Queers and freaks who want to be accepted by the rest of society … hello, I’m talking to you. I agree that society should be kinder and more tolerant – but it isn’t and it keeps bullying, raping, beating and killing us. If you think hate crimes aren’t happening – get to googling. And I’m saying hate crimes and grouping homophobia with religious and racial intolerance and and and … all of the ways society has chosen to make its opinion known.

If you’re a fan of democracy and society is saying that queers should not exist, then surely society is right?

So we – we the outcasts and our allies – work and revolt in order to change minds and laws and save lives. because it ain’t about getting equal tax breaks for fuck’s sakes, people die!

A gay teenager was decapitated, dismembered, and burned to death in Puerto Rico. The police investigating his murder said he deserved it because of his ‘lifestyle.’ (via Calpernia)

How many stories like that do you need to read to be convinced? The answer is – one’s too many – but oh people, there are so many more. And imagine how many more that we never even hear about.

Obviously my gaydar radar is attuned to news of my own community, but let’s get broad again. Intolerance of anyone for any reason is actually bullshit. And if you, as a queer, are not willing to identify with the rest of us queers out here in the firing line – fine. Enjoy your closet. Enjoy the herd and the blood on your hands (yes I know I’ve said that in 3 posts running now). Society won’t change unless you change it. Voices won’t be heard unless they’re strong and part of a united force. Perhaps you’re sitting there thinking things have improved? We live in a world where genocide is constant in the so called 3rd world and where even in the first, teenagers are killing themselves and Jews still aren’t safe. People assume that Muslims are terrorists. And. So. It. Goes. On. Ad nauseam, ad infinitum.

On a good and positive note – my favourite aunt, Kate Bornstein says it gets better. 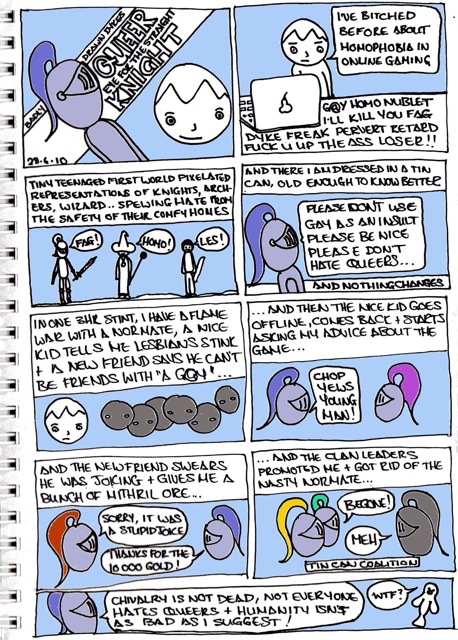